Create a research intervention to track and improve children’s adherence to best brushing and flossing practices.

A randomized control trial delivered via a mobile application that has the user empathize with their own dental hygiene by taking care of a virtual pet tooth.

A two year client project for the Stanford University School of Medicine, culminating in a pilot and application released to iOS and Android app stores.

Create a research intervention to track and improve children’s adherence to best brushing and flossing practices?

Brushing and flossing are two daily habits that children must learn at a young age, however 21% of children 6 to 10 have had dental caries in their permanent teeth. Understanding health behavior and the effects of interventions on behavior change has been historically difficult because of the nuances of a person’s life away from their doctors office. The ability to study the day-to-day changes only came about with the rise of smart devices and their capacity to collect data on-the-go. The Stanford HABIT Lab was interested in utilizing smartphones to understand patient adherence to healthcare recommendations by focusing on one non-invasive health habit, brushing and flossing and one specific usergroup, children. 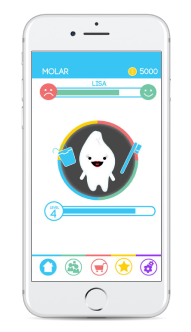 Care for your pet.
‍Kids can pick a tooth pet, canine, bicuspid, premolar or molar, and care for it by logging their brushing and flossing every day. They can keep track of their pets happiness and purchase multiplier accessories.
‍
Need: Kids need a way empathize with their dental hygiene in a fun way.

Support your team.
Kids can join teams with their friends to keep track of everyone's progress and compete against other teams.
‍
Need: Kids needed a way to understand their dental hygiene practices compared to their peers. 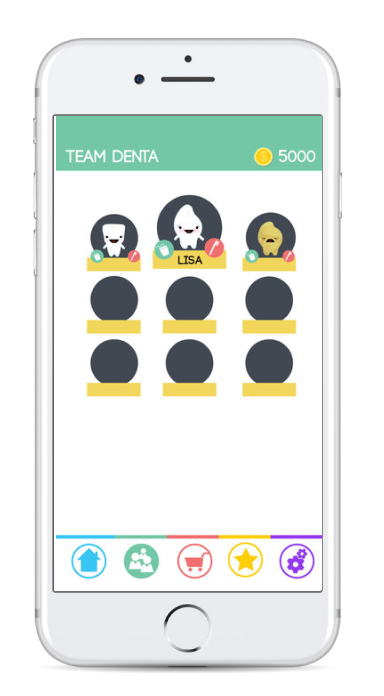 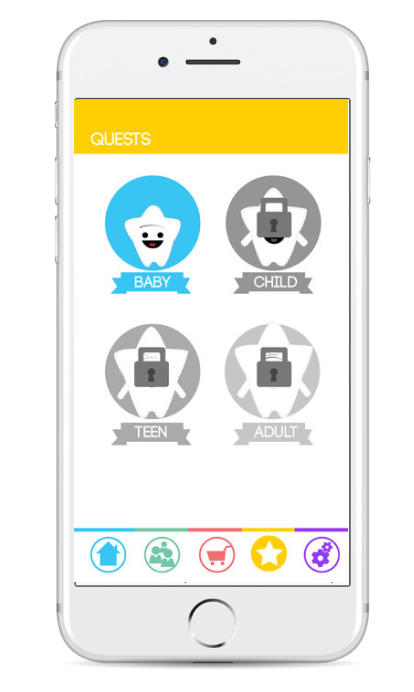 Go on quests.
Kids can take their pets on adventures, unlocking quests as they complete checkpoints throughout the game
‍
Need: Kids needed a gamified way to challenge themselves and enjoy the experience of taking care of their teeth.

Our team conducted secondary research, semi-structured interviews and subject matter expert interviews. I was brought on to design the user interface but I decided that, to address our design question, I wanted to understand what the current barriers were to better dental hygiene.

We referenced dozens of academic research papers to understand the health benefits of brushing and flossing your teeth regularly. I also conducted my own competitive analysis to compare the different kinds of digital habit forming experiences. 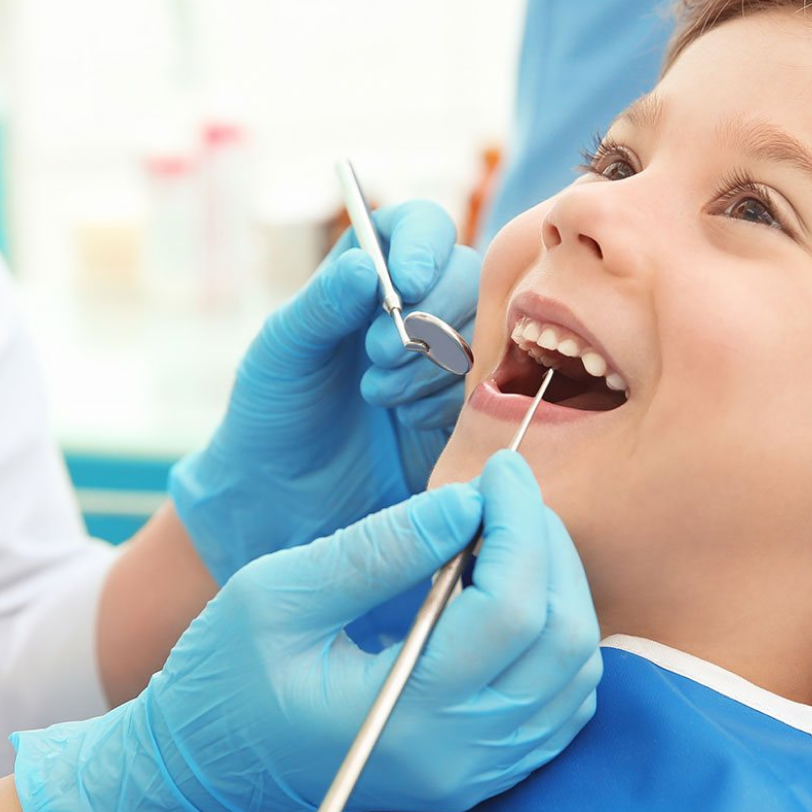 Working at a research institution allowed us access to various subject matter experts. I spoke with three pediatricians to discuss flossing from a health care provider’s perspective. I learned that certain regimens reflect a patient-centered approach, such as how many times to brush and floss per day, duration and technique to reduce build-up of plaque.

Since it was a small team, I conducted later stage interviews with children, aged 6 and up, to understand how they felt about flossing. We heard stories about scary dentist appointments, disagreements with parents but predominantly about how they would floss if it were fun. These insights contributed to a broad understanding of the barriers to flossing regularly.
‍
Participants: Children, aged 6-10, and one parent present at each interview.
‍
Goal:  To understand what the pain points were to adopting more flossing in the hygience routine 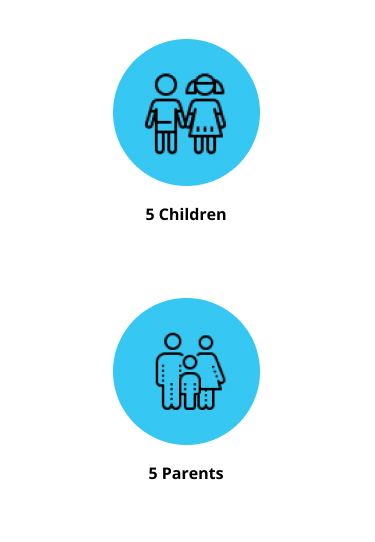 I interviewed 5 children, with one parent present.

From these interviews and synthetic artifacts, I used affinity diagramming to synthesize the user research results into many themes and insights. I focused on the perceived barriers from both the child and parent perspective.

Kids in that age group only had access to their parents devices.

At the time, in 2015, kids and parents tended to share a mobile device and parents did not want their kids using their device for long periods of time.

Kids would floss more if it were fun but making anything too engaging would be detrimental to the child's attention span and time.

Kids wanted flossing to be fun but parents were concerned about their kids being hooked on video games.

Kids did not seem to consider their teeth as something they needed to “take care of”.

Kids seemed to not fully grasp the connection between their own behavior and the health of their teeth. The sense of ownership was hard to connect to.

From our user research, I decided that the experience would have to be a fun challenge but a low time commitment. I created certain guidelines for the design to act as design principles. These guidelines were heavily influenced by the research and the guard-rails that I kept returning to throughout the process. 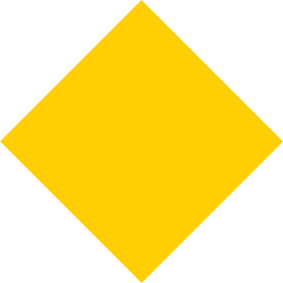 A playful tone throughout the experience, because the best way to keep these users engaged was to make it fun
and energizing. 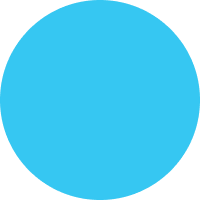 Simple interactions that a younger child at the time could easily learn while not spending too much time on their parents phone. 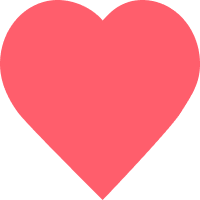 An overall empathetic journey for the user and their pet, to foster care of their own dental hygiene.

Creating a technological strategy within the limits of our resources was going to be challenging. From our insights , it was clear that my best option was to reach the users through play. When I started working on the project, the concept had already been focused around a story-line of tooth characters. I mapped the current experience out with our game designer, to see where the opportunities were to simplify the experience. 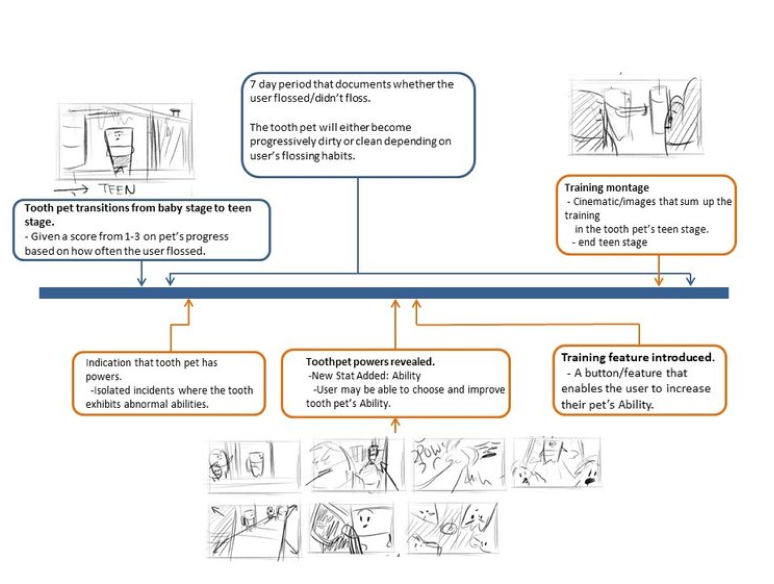 We mapped out the persona's thoughts and feelings. 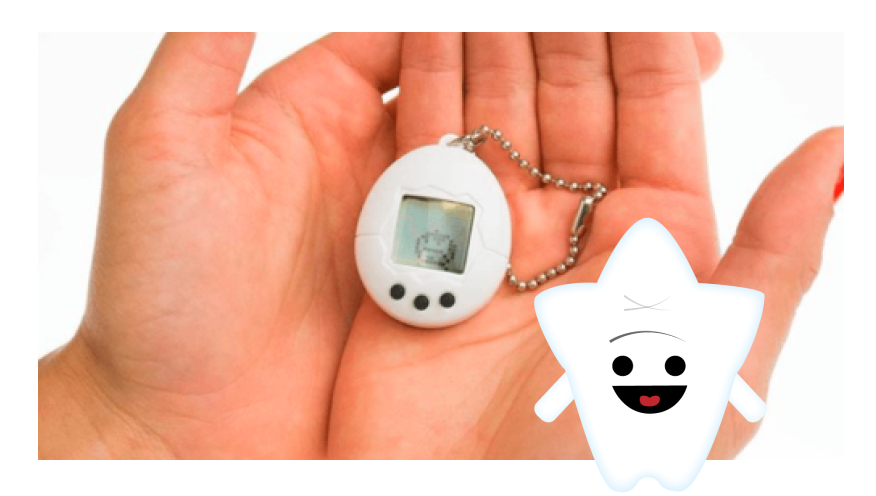 The designer who worked on the project before me came up with the character design for the pets, I adapted them for this new concept

Armed with a few game ideas, knowing the development constraints we had and without much guidance in the ideation process, I decided to pivot the experience to one similar to a "tamagotchi" style pet game, where the child could pick an anthropomorphic pet tooth to care for by logging their brushing and flossing every day.
‍‍

The main purpose of the app was to split the users into different experimental groups and show them different scoring systems, comparing their progress to illicit a change in their behavior. With the design principles in mind, our team split the scoring patterns into experience and ability scores for each tooth, with personal, team and global scores for all users. 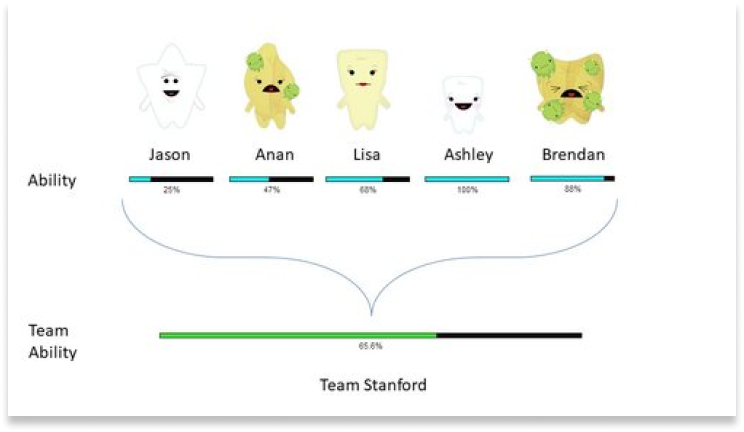 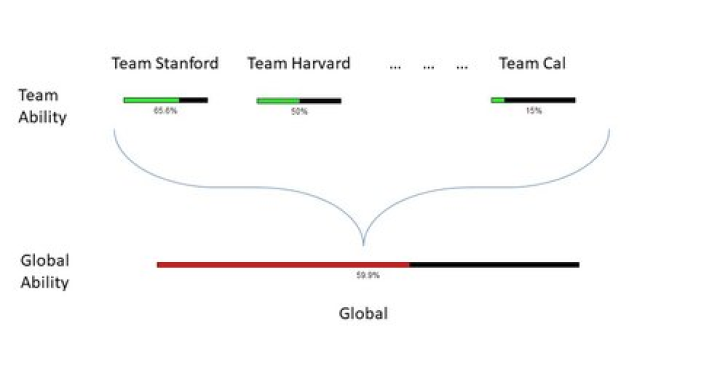 From the pilot testing interviews, I was able to a certain a few important insights to adjust the design to align with our design principles. Since this was a HIPAA compliant study, I cannot include direct quotes from participants so I have added notes from the usability studies.

The participants were initially unclear about what each feature was and how to interact with them .
‍
Refine: Make a clear distinction between pages and a simple tutorial to guide the first use.

The users also found it a little difficult to initially understand the different features and the game play action of dragging the flossing and brushing icons over the tooth to log their activity. 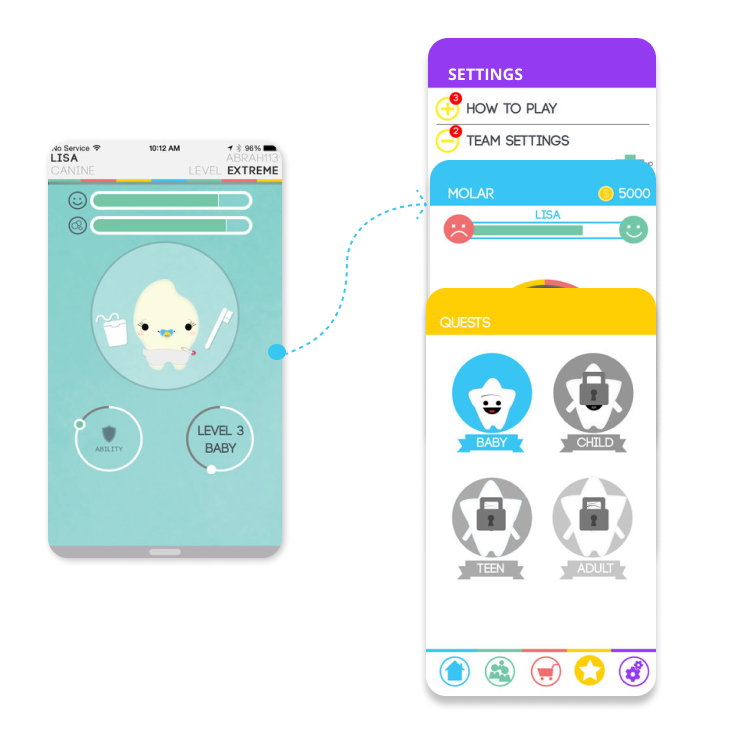 I used a candy color scheme for the feature banners to differentiate each page.

The participants were confused when it came to the ability and experience scoring. There were too many scoring bars to keep track of and not enough information on each individual score.
‍
Refine: Make the scoring visual and simplified for easy comparison.

They were able to get a general understanding of the scoring from the happiness and cleanliness bars, though the actual graphics were hard to understand. 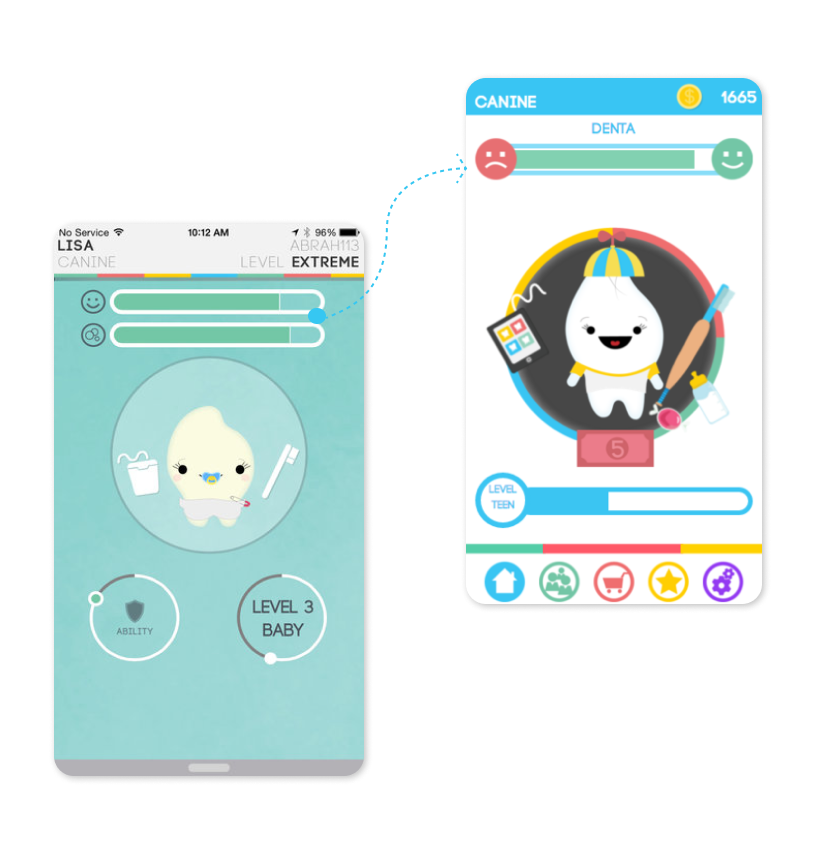 Using a very simple happy-sad scale, I tried to make it clear how the pet was feeling.

The participants liked the pet designs but did not like the lack of interactions or animation made the tooth pet feel less alive to the users.
‍
Refine: Make the few interactions we offered more visually interesting.

They enjoyed the pet creation process and the level of personalization options. According to the interviews, The style of the pets was very appealing.

I wasn't able to address this finding, but keep scrolling to see what I ended up doing.

Layout of the Experiment

The structure of the experiment itself was a three-level, tiered A/B test that would group new users at random and show them different scoring patterns. The doctors and researchers guided me through this process, since it was my first experience with in-app A/B testing. I created simple scoring bars for features like team and global scores that could be shuffled for A/B testing. 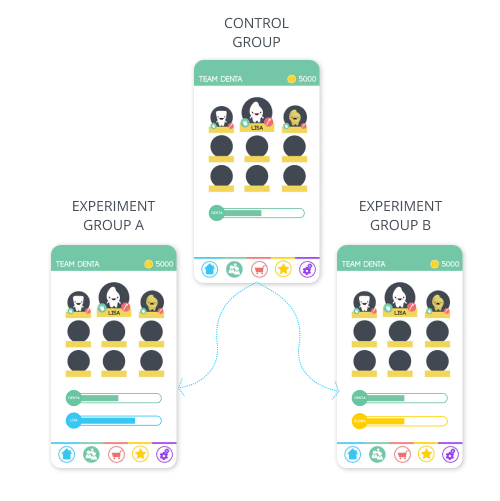 There were several visual scoring experiments, here is an example of different comparative scores 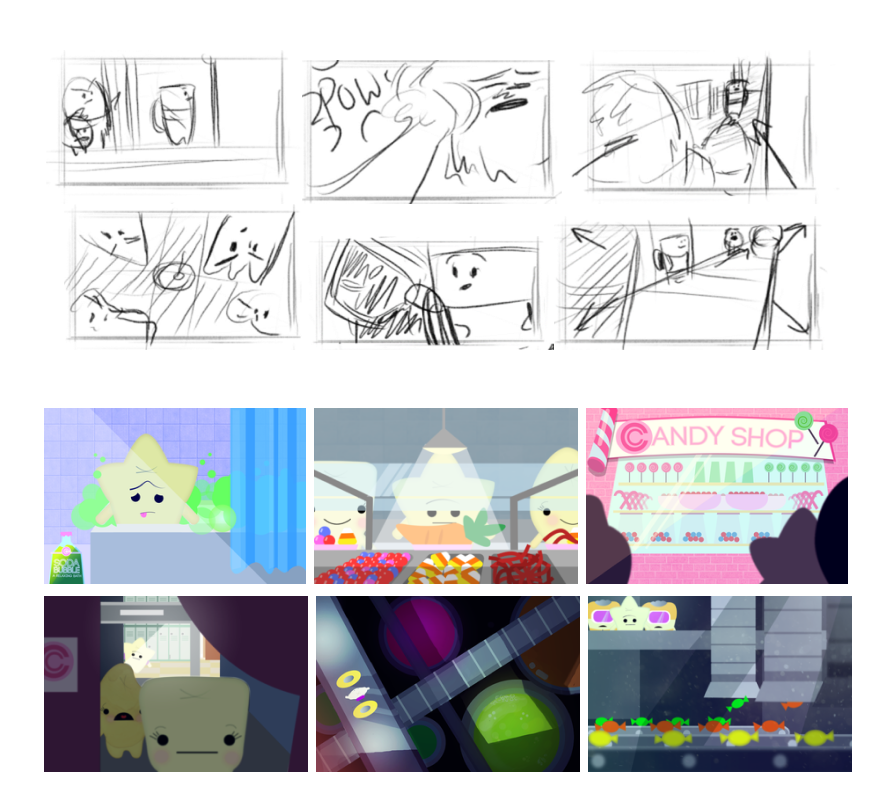 I sketched out storyboards and then created highquality renders of each quest story beat.

I wanted to take the user on a journey with their pet. I focused on mainly designing features that would hold user engagement for 3 months, the period of the study. I achieved this by designing challenges and streaks that would mirror the growth of the pet and tell their story. I created a storyboard each "quest" with a goal to complete. The story itself was an empowering tale of standing up for what you believe in and questioning the system that markets candy to a world of tooth pets!

The project culminated in a web app that was packaged and released on the iOS and Google play stores. Since this was a research project, we recruited about 250 participants to use the app. This research has not been published yet so I cannot reveal the specific metrics or data gathered from the participants. This was my first user experience design project, since I did not have the resources at the time to make interactive elements, I made a video to describe each feature and how they work together.

In 2016, we released this app to the iOS and Google Play stores. However, considering our resource constrictions and timeline, I was not able to implement the suggested changes from the usability studies that would have made the experience more engaging and interactive. I have returned to the concept and redesigned the key features for the iphoneX. If I were able to address the usability feedback, this is how I would do it. 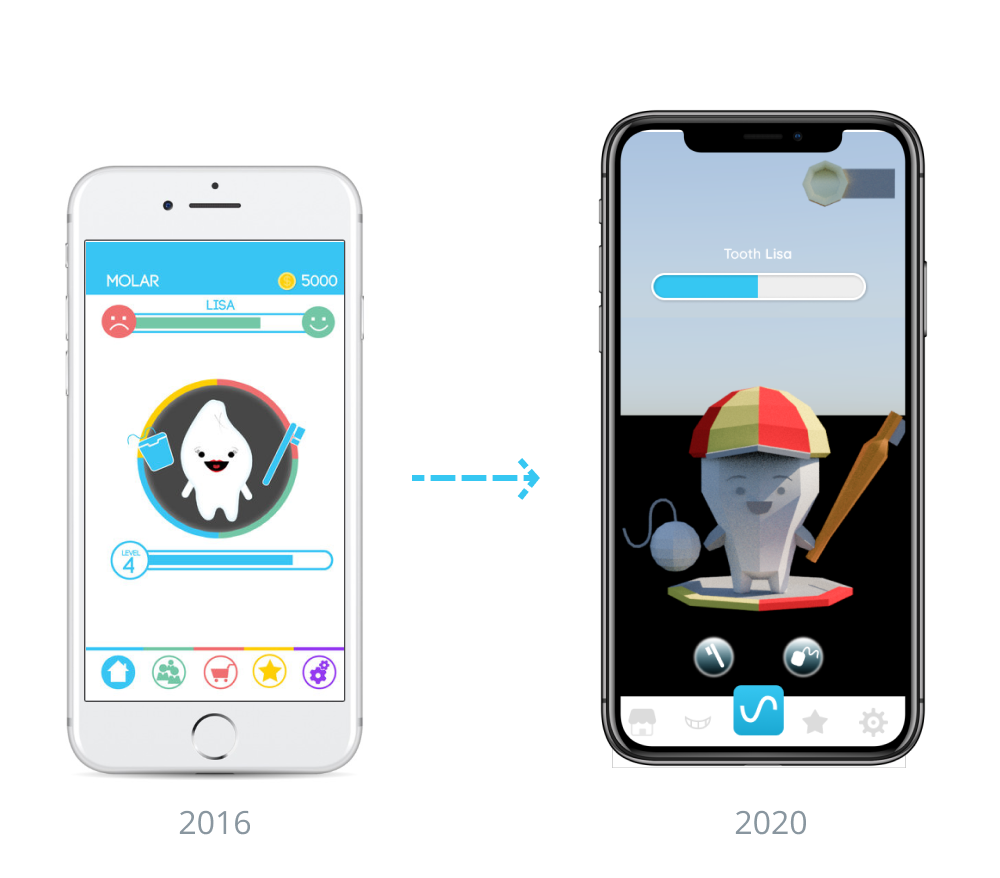 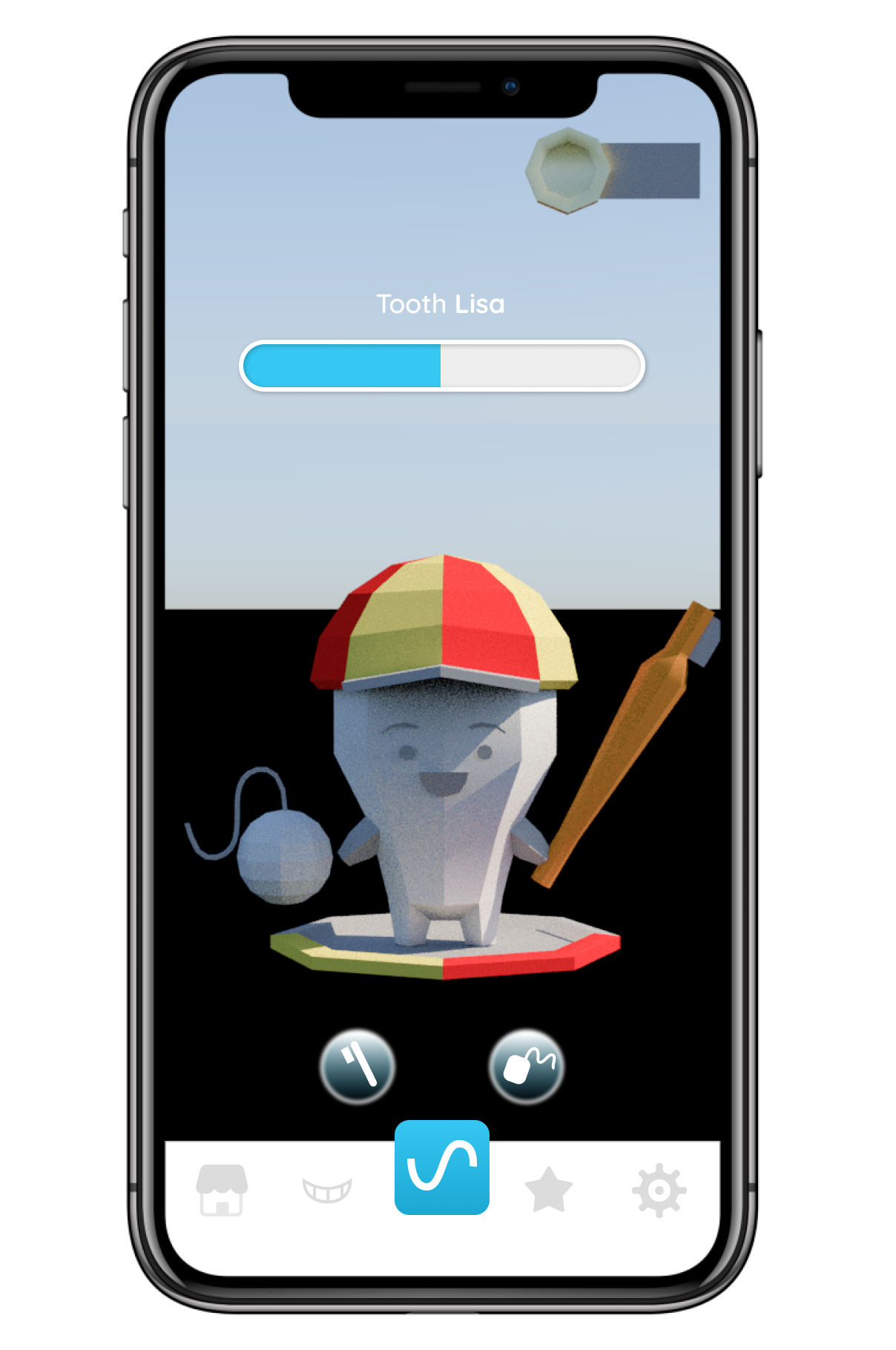 You can care for your tooth with the same few interactions, but each interaction is more interesting.

Home.
Take care of your pet by logging your brushing and flossing daily. Use augmented reality to project your pet and take photos with it!

Team.
Join a team with your friends and keep track of how the team is doing. Compete with other teams to see who has the best teeth! 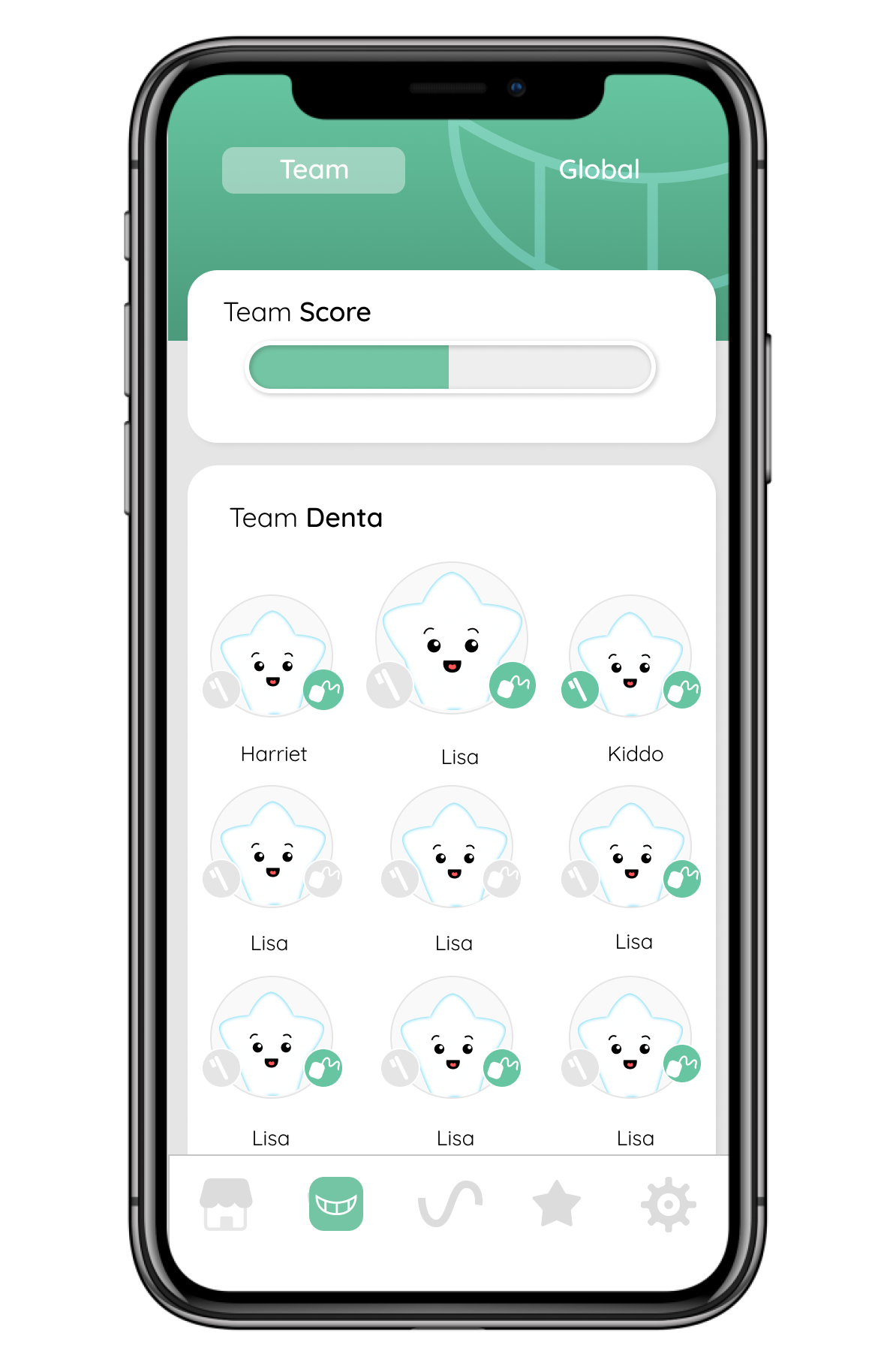 The team gives the user a view of every member and whether they have brushed or flossed that day. 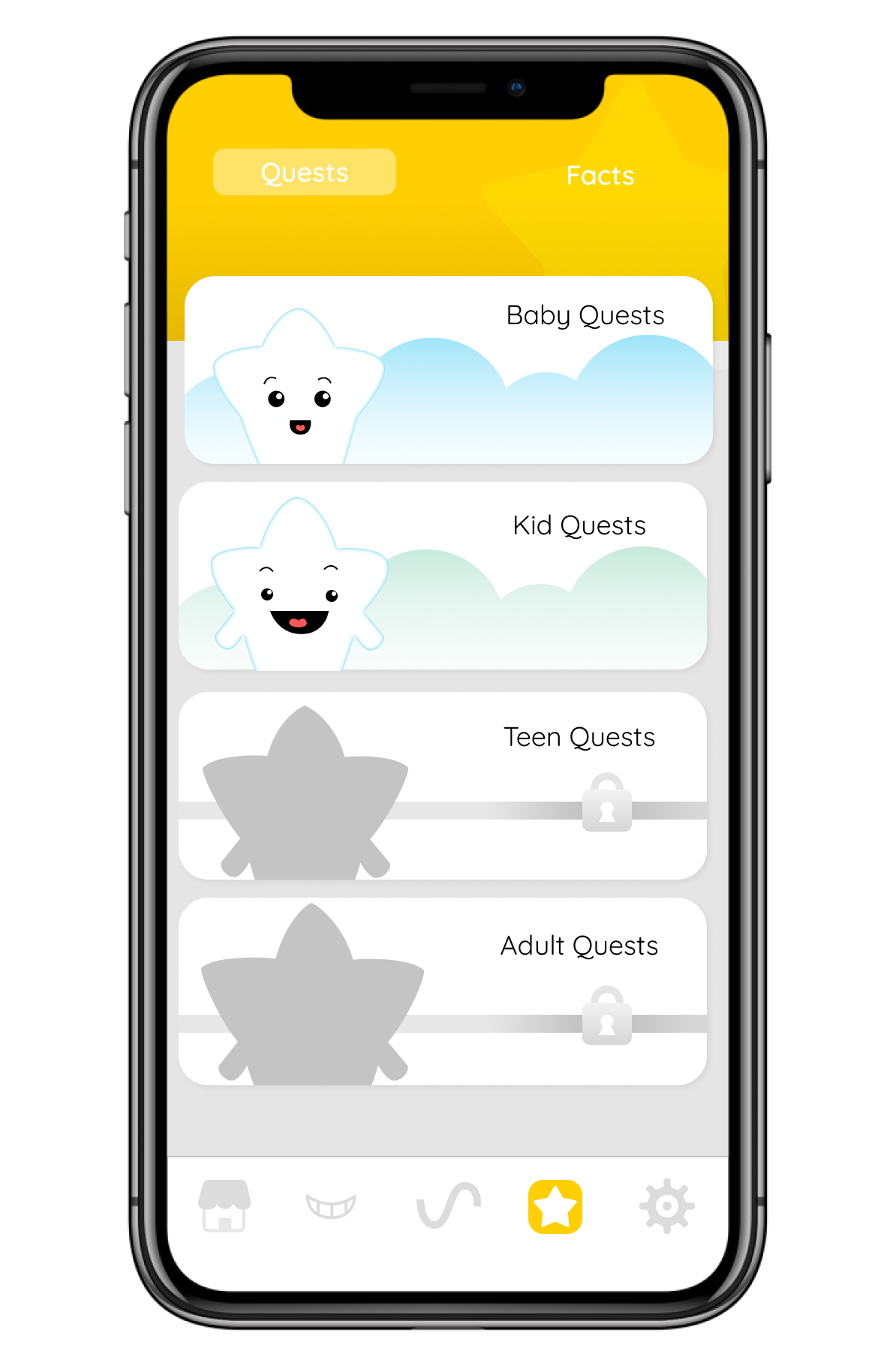 The quests are timed with the growth of the pet, so it feels like your pet is really going on an adventure.

Quests.
Take your pet on adventures by unlocking quests. Each quest comes with a story point and a challenge. The story unfolds as you complete the challenges.

This project was my grounding education in the design process.
I had not formally learned the design methodology at the time I worked on this project. I missed many opportunities to record process because I wasn't aware of how important it was to do so. However, Stanford University was a wonderful place to learn design organically. I was able to attend design workshops and development classes to further my understanding of the product design process in real time.

I did not go into this project anticipating to become a designer, but I am glad I did.
I had just graduated college and I was looking for an interesting opportunity to apply my storytelling and visual skills when I got on this project, which started off as an illustration job and quickly grew to be an entire product design experience. I learned so much about working with stakeholders, other designers and developers. I am very proud of having designed and shipped a whole product two years out of school.